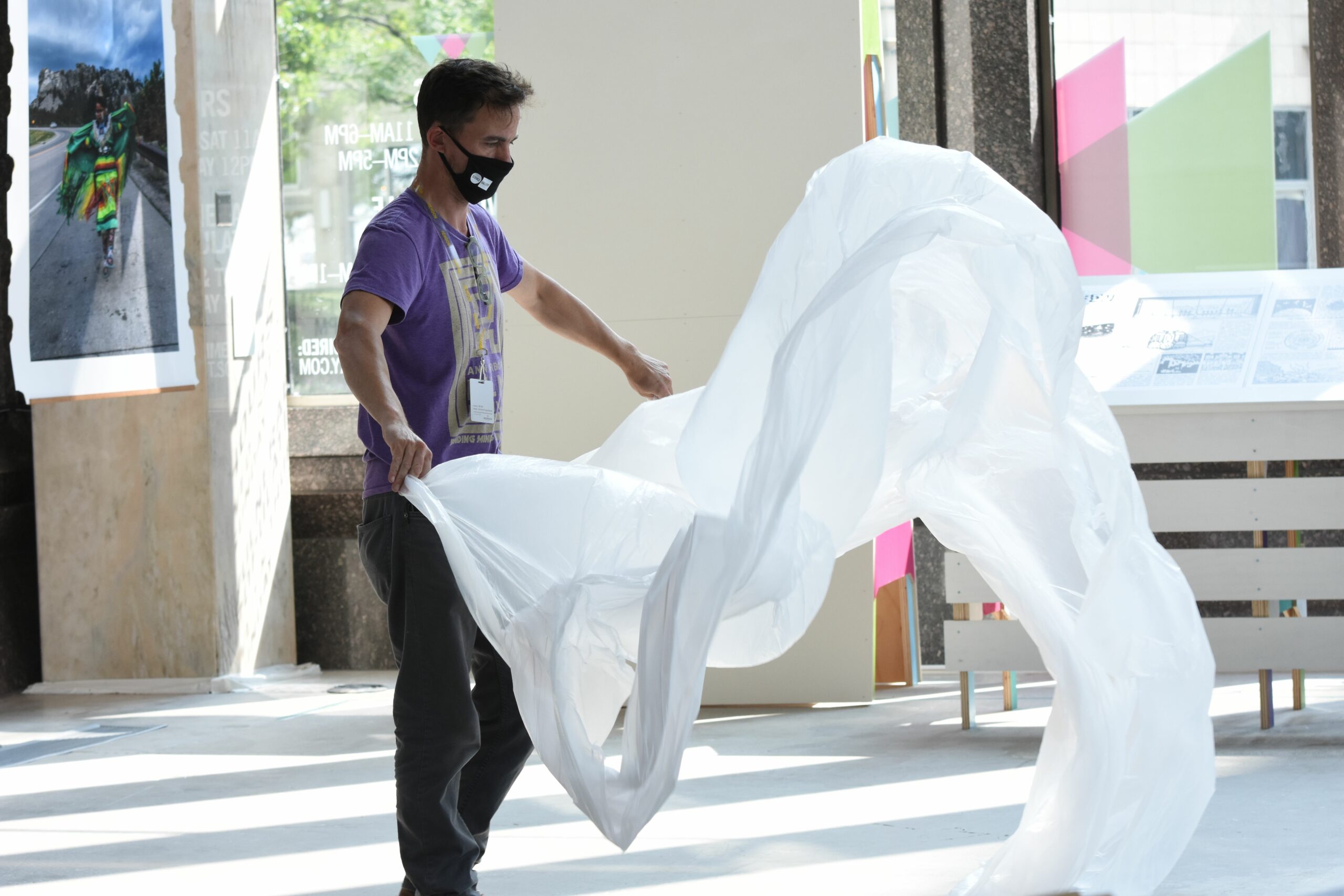 Ever wonder who’s the exhibition designer behind Science Gallery Detroit’s exhibitions? Allow me to introduce Jason Jay Stevens, co-founder of the exhibit design company Flutter & Wow Museum Projects. This company brought to life all three Science Gallery Detroit exhibitions: HUSTLE, DEPTH and FUTURE PRESENT. Read on to learn about the broad array of challenges that come with designing a gallery space, and the unique solutions that always put the visitor experience first.

SS: Putting on a Science Gallery Detroit show is a bit different this year given we are living through a global pandemic. Can you tell us some ways in which Flutter and Wow has adjusted the FUTURE PRESENT gallery layout for this year’s unique situation?

JS: For the first time in my life, I had to design an exhibit during a pandemic which is definitely a time of urgency. It forced me as a designer to do a few things that, up until now, I had sworn off doing as a designer. For example, I have always advocated that visitors can go whichever path they choose when they enter the gallery — following their own nose, eyes, and ears and seeking out journeys through a gallery. But because of Coronavirus precautions we have to take in the gallery to help people avoid exposure, there’s an imperative for people to follow a particular route so they don’t bump up against each other as they’re crisscrossing through the room. So this is the first exhibit after many dozens of exhibits I’ve designed where we go from one thing to another in a sequence.

Preparing for an exhibition during a pandemic was really frightening to me at first, but it became an interesting limitation. As is often the case with creative work, limitations often give rise to more creativity so I’m really happy with the way that it turned out. Beyond that of course, there are hand sanitizing stations, social distancing, and all of the things we’re slowly becoming accustomed to in modern life during a pandemic.

JS: Every good project has big challenges. I live for the challenges! HUSTLE and DEPTH actually shared a challenge — the space itself. With HUSTLE, we were working in the same space we’re in now, the exhibit hall at 1001 Woodward which actually used to be a bank lobby. It has marble floors, and three walls are floor-to-ceiling windows. The natural light is wonderful, but it’s very difficult to do exhibits when we can’t control the light. In that space, as you know, the sun really pours in and moves over the course of the day. It’s very difficult to place artworks that all have very different relationships with light. Inevitably, there are works that really want isolation from light and be in darkness. So we have to create a dark space in a room that is unforgivingly bright. So that was a challenge. Ironically, last year, for DEPTH, we had several works that needed sunlight to grow and we were in a room with no windows, so the challenge was quite the opposite!

Because this is during a pandemic and part of the design challenge is to give visitors a sense of safety; a sense of open-air is nice. So we’ve designed these rooms so that the walls tilt back. Imagine being in a little space where the walls tilt back: the floor is smaller than the ceiling so the rooms open up to the very tall ceilings and the corners don’t all come together perfectly so you get a sense of airflow.

I realized while I was working on the 3D model that we were building all these shapes reminiscent of Jersey barriers, which is the name for the concrete structures you see between lanes of the highway, and which law enforcement uses to block public access to places. We’re doing this in a pandemic but also at a time of protest, with a lot of people in the streets, and a lot of confrontations with law enforcement. These barriers have become a part of our visual culture like never before. They also kind of look like sections of border wall so they seem like very apt symbols for Design in a Time of Urgency, particularly in the time of urgency that we are in.

So I hope the space gives people this feel: you walk in and there are these wall structures that look like something the authorities have used to block access, but we’ve gone ahead and nudged them aside and hung an art show in it. We’re throwing a big art show in this space that we’re not supposed to have access to. So that’s the big idea of the show and my hope is that that comes across. It turns out a lot of the artwork that’s being exhibited works with that same concept.

SS: Thanks for giving readers that very clear image of the gallery space, Jason. Flutter & Wow has created exhibition spaces for countless venues, including ones I’ve been to but was not aware of being made by your group such as at the Detroit Institute of Arts and Wayne State University. Could you tell us what sets Flutter and Wow apart from other exhibit design companies?

JS: We do a lot of different kinds of work so our expertise is really wide ranging. As you just pointed out in your question, we do work for art museums as well as history and science museums, and work for private clients. What unifies it and what I think makes us special is our very particular focus on the visitor experience. I’m in this business to create experiences that have the potential to change people. So it’s not just that it’s an educational experience — which very often it is — but also that it’s a moving experience. I want to create spaces that aesthetically move people so we think about visitor experience from that angle.

We also focus a lot on accessibility in the broadest possible sense. People are probably familiar with accessibility meaning handicapped access and making sure wheelchairs can get around which is very important. But we like to think that accessibility benefits everybody. If that’s somebody for whom English is their second language, the content of an exhibit needs to be able to communicate without the written word. People who come to exhibits come from wildly different backgrounds so we can’t assume we know who’s coming to visit.

We try to create exhibits that appeal to all kinds of people that come through the doors and that often also means that the experience isn’t just through reading or just through tapping on a computer screen, but multimodal. So a three-year-old child can go and get something out of the same exhibit that the grandparent can read the chapter-length text on. So they can both walk away and hopefully even get to share their experience of it with each other. That’s the kind of thing that we focus on that I think sets us apart.

SS: How do you go about teaching exhibit design as an educator (ie. is it more blueprint oriented or hands on?)

JS: I’ve taught undergraduate and graduate students in exhibit design at Lawrence Technological University and the University of Michigan (although currently, I am not teaching). My approach is absolutely hands-on. I love taking students on field trips, especially when we can go behind the scenes.

One of my favorite days during the Lawrence Tech semester would be the Design Tour of Detroit. We would go around and look at public art and different designs in Detroit and there’s such a wide range of things to look at. I find that students and even people living in Southeast Michigan are remarkably unaware of the riches that surround us and so it’s one thing to expose students to little glimpses of that richness in our city, but there are also a lot of learning opportunities from a design perspective.

Even the casinos bring a layer of richness; they’re just a totally different kind of design and I like to teach about them in relation to museums. We also sometimes visit religious sites. People who design religious sites are often very much focused on the experience. So I like to seek out designed experiences in the city and give students the opportunity to compare those.

SS: Have you always had a knack for designing things, or was it sparked by an experience?

JS: I’ve been designing things since I was a little kid, designing comics books and games. I even designed a couple of museums and an amusement park as a kid. In fact, I designed a museum of religions as a kid and I sometimes think of that — there were some seeds of good ideas there! So I was a very creative child, but none of that meant that I left school and knew that I wanted to design museum exhibits. I got out of college and worked many, many different jobs over a decade but [was] always trying to learn new things and new creative processes. An early job was with a sculptor who happened to be doing work for an exhibit designer for a nature center in Kalamazoo and that was my introduction to museum exhibits. It’s been by and large museum exhibits ever since. I spent many years at the Ann Arbor Hands-On Museum designing exhibits and then started my own company in 2006 — and here we are today.

SS: Well, we’re so lucky to have you as our designer for 3 years and counting!

JS: The feeling is mutual! I really love Science Gallery Detroit. I love the concept of it, the philosophy of it and the execution of it. The team here is so supportive of my team and [to be] totally honest, it is a case study in how trust enables people to do better work. I get so much support from the Science Gallery Detroit staff and it helps our team do our best work.