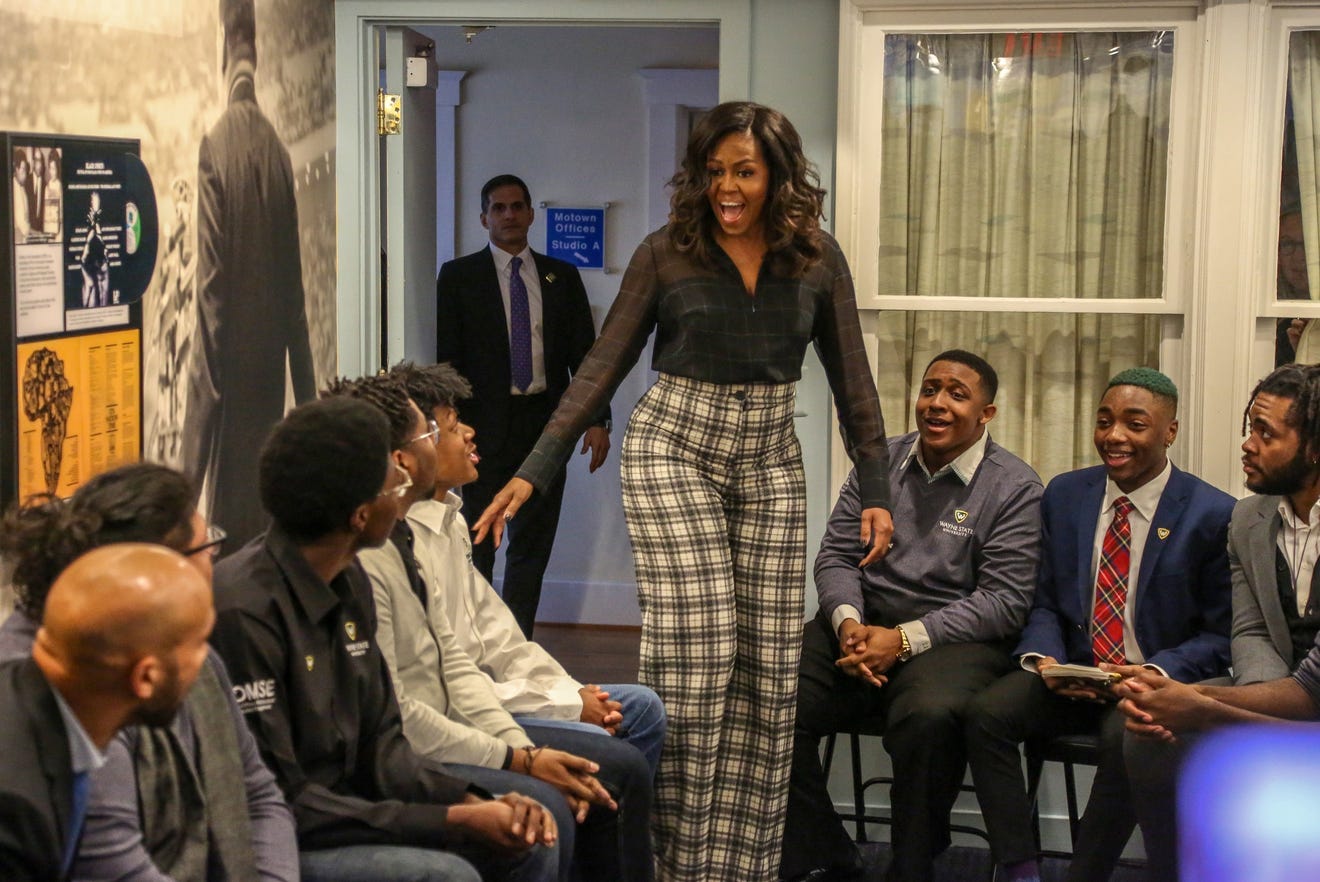 Your mama might tell you not to give up.

The actor, Keegan-Michael Key, might tell you not to give up.

But when Michelle Obama, the former First Lady of the United States, walks into a gallery at the Motown Museum, stuns your group of Wayne State University students and tells you not to give up, it means something.

That’s what happened Tuesday afternoon when Obama, on tour to support her book “Becoming,” stopped by the Detroit museum just hours before her appearance at Little Caesars Arena.

Her brother, Craig Robinson, and Michael-Key, a Detroit native, were chatting about perseverance, drive, college and ambition with 18 young men invited by Obama’s Reach Higher initiative. The young men knew they’d meet with the former first lady’s brother, but had no idea that SHE was coming.

She strode in and — as happens often — owned the room.

“This is supposed to be boys only,” Craig Robinson, vice president of player development for the New York Knicks, said as he swatted at his sister.

“You know how I do,” she replied before taking a seat next to visibly shaken sophomore film student Miles Reuben. “What were you all talking about?”

Michael-Key invited the young men to end their applause and ask questions, and Cedric Mutebi, a junior public health major who chose an academic rather than athletic experience at WSU, dove right in.

“Through my journey so far, I’ve found that in a lot of circles I’ve been entering, I’m had to justify. prove why I deserve to be in those circles … kind of like your experiences … as you fight those mental and psychological struggles … what would you say when you have to continuously justify why you deserve to be where you are?”

“Chapter Three,” Michael-Key deadpanned to laughter, before Obama addressed a question that many of the young men, all striving in an atmosphere where expectations for them aren’t as high as they should, or could be, said:

“Universities are looking for — and should be looking for — a diverse array of experiences, people from different backgrounds because if everybody looked the same and experienced life the same way, what would these conversations be like, just a bunch of people agreeing with each other? But the other thing you have to remember is that they admitted you for a reason. None of these schools want to have high attrition. I’ve worked for universities. … I’ve been a dean of students. I know that schools think long and hard before they let anybody in because they don’t want you to fail because that looks bad on them. … They want you to succeed, so you’re there because they know that you can.

“So … you’re the person that has to get out of your head. Trust me. It will continue beyond college, no matter where we go. There were people who thought that Barack couldn’t be a good president. There were people who questioned whether I would be a good first lady. My brother gets questioned all the time about whether he’s qualified or able, and we all face those things. That doesn’t go away. But you have to practice knowing who you are and focus on just doing the work day by day. That’s really all you can do.”

And in just that moment, with that short speech to those 18 young men, those future doctors, actors, engineers, psychologists, architects, sports reporters, automotive designers, computer scientists, physical therapists, she gave them the world according to Michelle Obama, the world she has been explaining on how she became.

For every young person, male or female, who is becoming and trying to figure out how, her advice is apt. But something Michael-Key said applies as well.

Those young men, who will remember yesterday and the lesson for a lifetime, must also remember something widely attributed to W.C. Fields: It’s not what they call you. It’s what you answer to.

And that is why Obama’s book — and story — are so important. As we, whether we are women, men, American, African-American, political or not, decide what we are becoming, we must choose to be comfortable knowing that no one else can decide where we belong.